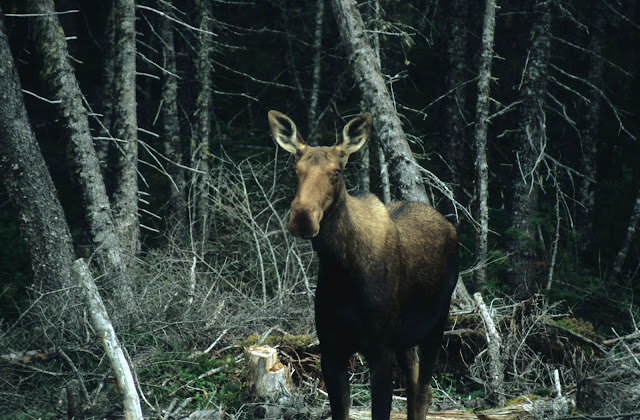 Bottled moose is a Newfoundland delicacy, and for an expatriate such as myself, is worth more to me than gold. For those who do not know what bottled moose is, it is technically "canned moose", but since it is typically can preserved in mason jars, we call it bottled moose. We also bottle rabbit and seal but that is another story. 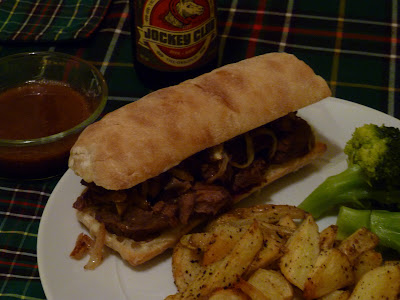 While different people have different methods and ingredient quantities, there are typically three key ingredients....cubed moose meat, a little onion, and a little fat back or salt pork. The concoction gets stuffed into mason jars, seasoned with some salt, and water canned for a long time. These days people seem to be starting to pressure can their bottled moose, which is a good thing since pressure canning is the only truly safe way to preserve meat.

Anyways, I mostly get my bottled moose from my Uncle Harold who is a seasoned pro at it. He lives in central Newfoundland, and I have always thought of central Newfoundland moose are the best tasting. When you are lucky enough to get it bottled, you simply can't beat it. The bottling processes makes even the toughest cut of meat incredibly tender, and the flavor is distinctly rich, savory, and just slightly gamy (in a good way). As many of you can attest to, bottled moose rules, and whether is up at the cabin, or having a boil up out on the pond in the middle of winter, nobody will ever screw their nose up to the stuff.

So, as I looked at my unopened box of bottled moose the other day I got to thinking what a nice feast it would make for my birthday supper. A real treat you know. Then, as my creative culinary juices began to flow I envisioned ways to mix it up, and began thinking about other red meat sandwiches. What came to mind was the classic French Dip, and behold, the birth of the Moosewich Dip! Here it is. 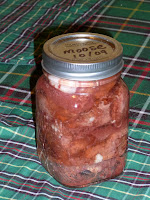 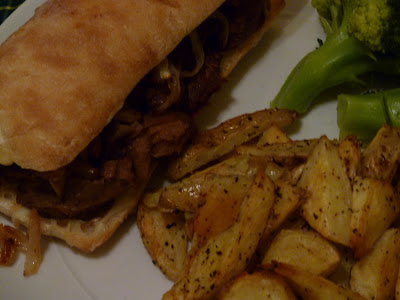 Empty pint jar of bottled moose into a small sauce pan (aka dipper) and warm through over a light simmer for 10 minutes or so. Cut onion in thin slices and saute in a little oil over a medium high heat for 2-3 minutes. Reduce heat to medium and let onions brown and begin to carmalize for another 10-15 minutes. Season with a little salt and pepper. Meanwhile, cut a baguette or narrow ciabatta loaf in half so you have 2 6" pieces, and slice each in half lengthwise. Place a layer of grated cheese on each cut side of bread and melt in the oven or under the broiler. Once the moose meat has heated through, remove from the sauce pan and set aside, leaving the moose liquor, or au jus in the pan over the heat. To make a dipping sauce add the chili sauce or ketchup. Open your bottle of beer and a drop to the sauce. Arrange the moose meat on a piece of the bread, top with fried onions and add the second piece of cheesy bread. Serve warm with a side of savory and garlic roasted chips and dip the sandwich in the au jus as you go. It is awesome! Enjoy.