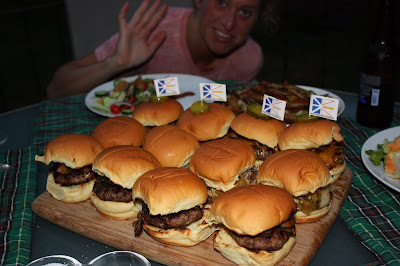 Just as with hamburgers/cheeseburgers, the variety of sliders that can be made and enjoyed is endless. The key to making a great slider is simple. Choose small, soft rolls and stuff them with a juicy, well season, non overcooked burger. I have found that I am beginning to find "slider rolls" labeled as such at the grocery store, but if you can not find the, small soft white dinner rolls are a good option. in my neck of the woods, I prefer Martins Potato Rolls "for Sliders".

This past weekend we had company I wanted to make a dinner that was casual, could be made on the grill, and would be tasty! I've been enjoying using my meat grinding attachment on my stand mixer and I had some nice sirloin steaks that I thought would make good slider meat. Sirloin is leaner then chuck (90% as opposed to 80%), so I was conscious to only cook the sirloin sliders to medium/medium well, or pink as they say at some burger joints in order to retain the juiciness I was looking for. Chuck is probably the best meat to use for burgers, especially if you want it to be cooked all the way through and don;t mind the extra calories or fat.

My goal was to make a trio of sliders. For inspiration I drew on a couple of classics, in addition to using some more of my "Newfie screech coffee spice rub". What I came up with was a bacon cheeseburger slider, topped with sharp Vermont cheddar cheese, fried onions, ketchup, yellow mustard and dill pickle; a green chili sliders, topped with canned green chili's (diced and sauteed with fresh jalapeno, garlic and cilantro) and pepper jack cheese; and finally, a Newfie Screech coffee slider equipped with a drop of steak sauce and sauteed mushrooms deglazed with a drop of dark rum

For my slider meal, I made 12 sliders out of a little more than 2 pounds of freshly ground sirloin. Each patty was about 3 ounces. For burgers I typically do not season the meat until I have formed the pattys, and usually I only add salt and pepper. I like to let the condiments and toppings bring the extra flavors. This is what I did for my sliders, with the exception of the the third slider, which received a liberal coating of the Newfie Screech coffee-spice rub on each side. For cooking the sliders, either pan fry them or cook them on a hot grill until desired doneness. As I said, for a leaner meat like sirloin (or if you are using buffalo or moose, etc) it's best to not cook past medium-well, while the fattier ground chuck will be more forgiving. I usually season the burgers, grill on the first side for about 4 minutes, flip, add the grated cheese and close the lid. By the time the cheese melts I remove the meat so that it can rest for a couple of minutes while I toast by buns. Then I assemble the works and dig in. 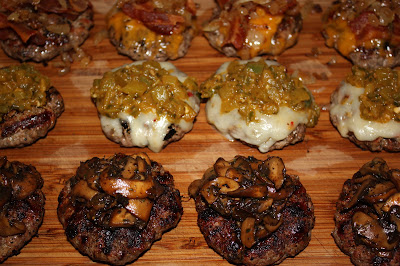