Here in western New England we're smack dab in the middle of harvest time. Thanksgiving is about a month away, and we've been reaping the benefits of the great growing season with early fall apples, squash, pumpkins and other vegetables. Just last week I harvested the last of my "summer crop" which included the final picking of hot peppers, bell peppers, tomatillos and tomatoes. This year was a spectacular year for my tomatoes, which included a variety of large red tomatoes and super sweet cherry tomatoes, due to the seemingly extra hot weather we had. My reward at the end of the season was a nice basket of large unripened green tomatoes. While I'll probably make some kind of relish such as a Chow Chow, the first thing on my list for these green tomatoes was the southern classic "Fried  Green Tomatoes".

The Fried Green Tomatoes are simply breaded in a corm meal crust and pan fried in a little oil. To add some contrast to the dish and make it a more well rounded first course, I paired them with a quick pickled bell pepper and cilantro salad. Here's how I put it all together. 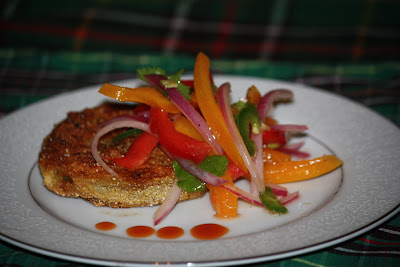 Directions: Set up three bowls for an assembly line for dredging the tomato slices. Season each slice on both sides with salt and pepper. Add 1 cup of flour to bowl 1. In bowl 2 add the egg and beat well with a splash of water. In bowl three combine the corn meal, 1 cup of flour and season with cayenne, salt and pepper. Heat a large skillet over medium high heat and add enough oil to the pan to completely cover the bottom. While the oil is heating bread each tomato slice by coating in the flour, then into the egg wash and finally in the corn meal. Set aside on a wire rack until ready to fry. Cook the slices in the hot until until crisp and golden brown, flip and brown. Remove and season while hot with sea salt. Serve with pickled bell pepper salad. 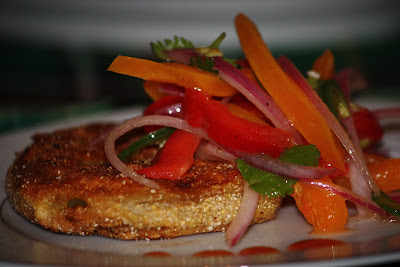 Directions: Combine the sliced onion and peppers and cilantro sprigs in a mixing bowl. In a small bowl, whisk the oil into the vinegar to make an emulsification. Season with salt and pepper. Add the vinaigrette to the veggies, combine well, and set aside in the fridge for at least an hour to give the peppers and onions a quick pickling. Serve with a garnish of hot sauce droplets.