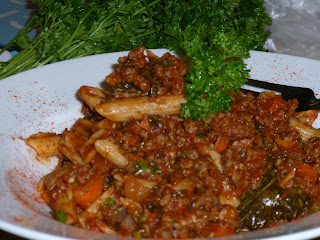 One of my favorite meals growing up was my Mom's goulash. I always remembered it being better than anybodies. It was nothing fancy, but it was done just right. There wasn't too much sauce, the beef was browned nicely, and the spices were spot on.  A simple combination of sauteed onion, green pepper, mushrooms and ground beef with macaroni, a can of condensed tomato soup and the essential Hungarian paprika made for a wicked meal. It was even better when Mom would make it early in the day and we'd reheat it for supper. Just like with a soup, the flavors developed after being taken away from the cooking process. Topped off with some Parmesan cheese, a squirt of Heinz ketchup with some buttered homemade white bread on the side and it was just the perfect meal. As a kid who played hockey nearly every day in the winter, it was a great way to carb load, in addition to getting lots of protein and veggies in me.

Now, as good as my Mom's goulash is, it isn't exactly goulash, at least not in the technical European style. Goulash, often called Hungarian Goulash is traditionally a stew made with aromatic vegetables (i.e. onions), tomatoes and cubed beef, seasoned heavily with Hungarian paprika. Much of the goulash that is made by home cooks in North America more likely resembles what my Mom makes. Versions with ground beef, tomato soup and macaroni were made popular by cookbooks such as Betty Crocker's back in the seventies (its sometimes called American chop suey here in the States).

When I got a craving to make goulash last week, I wanted it to resemble my Mom's dish and I wanted to use her secret of cooking it early in the day, and eating it later for suppers and as leftovers for work. With that being said, it wouldn't be me if I didn't put my own spin it. First of all, as a way to make the dish healthier I used a whole grain pasta (penne - because that's what I had on hand) and I added a little chopped kale for a burst of vitamins. The other big change I made was the addition of smoked paprika, in addition to regular Hungarian paprika. The result was a delicious, meaty and smoky goulash that was put a twist on tradition, but will be the start of a new family recipe. Here's how I made this wicked scoff. 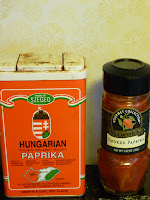 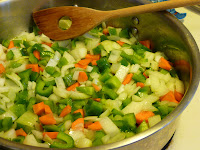 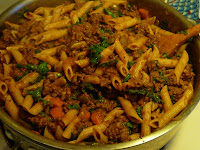 While the pasta is cooking saute the onion, green pepper and carrot in the olive oil in a large saute pan. Once the vegetable start to become tender, push them to the edges of the pan and add the ground beef to the center. Brown the beef on one side, break up with a wooden spoon and combine with the vegetables. Season with salt and pepper. Continue to cook for a couple of minutes until things begin to caramelize a little. Add the garlic, chili flakes, paprika and smoked paprika to the mixture and combine. Next add the Worcestershire sauce, hot sauce and crushed tomatoes. Mix well, and cook for about 5 minutes until the beef is fully cooked and the vegetables are tender. Add the cooked pasta and kale, turn off the heat, mix well and cover. When ready to eat, reheat the goulash in a low oven. To serve, sprinkle dishes with fresh parsley and extra smoked and Hungarian paprika and pepper if so desired. Also nice to grate some fresh Parmesan cheese over the top. Bon appetite! 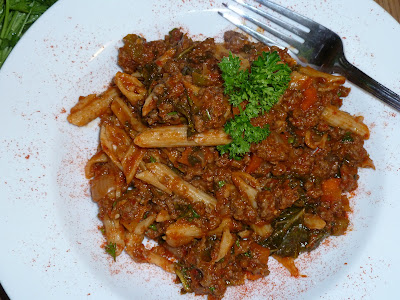