Well this is a first for A Wicked Scoff as I'm actually posting a slow cooker recipe. I don't have anything personal against slow cookers, but I just very rarely use mine. I see the value of them, and the whole set'em and forget'em philosophy, but I prefer being hands on in the kitchen. If I want to cook something low and slow, I like to brown it in my Dutch oven and cook it at 300 for 3-4 hours. As I'm finding out however slow cookers can be a indispensable kitchen tool especially if you are on a busy schedule such as working parents with a table full of hungry mouths that need feeding at the end of the day. After the success I had the other weekend with a slow cooker braised corned beef brisket, I'll be thinking up some new ways to utilize my slow cooker, which I no longer consider a wedding gift dust collector.

As you know, a couple of weeks ago was St. Patrick's Day, and to celebrate the holiday weekend, some friends and family came into town and we went out to a nearby Irish bar and restaurant for dinner and some live Irish music. We had a great time...a real scuff and a scoff! Since our guests were spending the night, I wanted to make a nice hearty brunch that would fit with the theme of the weekend as well as cure any ill effects from the night before. The plan was to make a deconstructed corned beef hash, whereby I would take the elements of traditional corned beef hash and serve them individually on the plate. People could eat them components as they liked, one by one, or all on the same forkful, thus reassembling the hash one bite at a time.

Since we would be getting home late I decided to cook the corned beef in the slow cooker and let it braise nice and slow overnight. I also cooked some cabbage in the pot with the brisket and to put a Newfoundland/Wicked Scoff spin on the whole thing, I added a bottle of Quid Vidi Brewing Company's award winning Eric's Red Cream Ale to the cooking liquid. The result was out of this world tender and flavorful corned beef. Move over bacon, this is my new breakfast meat staple! Also forget the alarm clock as the smells going through the house had everyone and feeling hungry bright and early.

I served the sliced corned beef along with some caramelized onions mixed with the braised cabbage, poached eggs, Habitant brand mustard pickles, rye bread toast and some homemade hash browns, seasoned with summer savory. Here are a few pictures of this delicious brunch, along with how I made the components and put it together.

Beer Braised Corned Beef Brisket...in the slow cooker!
Add the following ingredients to your slow cooker. Set on LOW and cook for 7-8 hours. Remove from pot and let rest, covered with foil for about 15 minutes. To serve, cut thick slices against the grain.
Caramelized Onions with Cabbage
In a saute pan, heat the butter and oil over a medium heat. Add sliced onion, and cook in the butter and oil, siring occasionally for about15-20 minutes. Add a little salt and pepper. Once the onions have browned add the cooked cabbage, combine well and keep warm.

Heat the oil in a large nonstick skillet or wok pan. Add the diced potatoes, toss in the oil to coat and cook over a medium heat. I like to cover the pan and let the potatoes kind of steam/fry until they become tender, about 10-15 minutes (stir occasionally). Once the spuds become a little tender and can be easily pierced with a knife, remove the cover and amp up the heat to medium high. Here I season the potatoes with the seasoning salt and garlic powder and begin to crisp the hash browns. Once they are nearly cooked and are crispy all over I add the savory, pepper and taste for salt. That's it, they're ready for brunch. 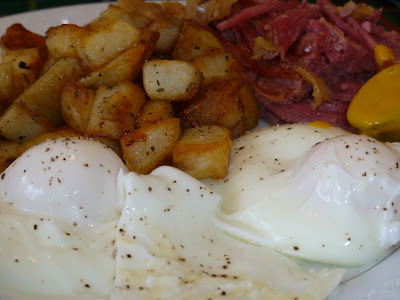 Server the corned beef sliced along side the onions and cabbage, hash browns and your favorite style of eggs and toast. With some refreshing juice and good quality coffee and you'll be in brunch heaven.  Enjoy.