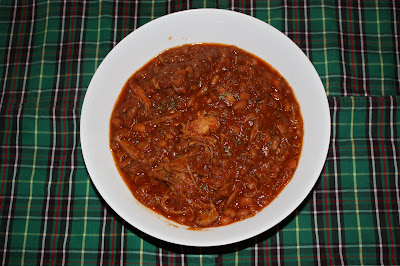 Baked beans are a dish that holds a place close to the heart of Newfoundlander's and New Englander's alike. It's an east coast thing I suppose. With ingredients from our isolated coastal past such as dried beans, molasses and salt pork staples in maritime kitchens it's no wonder this meal is so popular from from the tip of Newfoundland down to Boston, with many variations along the way.

While I like salt pork or bacon as a base to my baked beans I wanted to try something different and have a good quantity of meat in the final dish. Thinking back to canned pork and beans I ate as a kid, I thought why not make a baked bean dish with tender sirloin pork chops (also called county style ribs). With a busy work week ahead, I hauled out my slow cooker to do the job. Since beans love the low and slow cooking method, the slow cooker was the perfect choice. The result was a delicious, rich, hearty baked bean dish with tender morsels of pork and a tangy sweetness from the molasses, mustard and vinegar. You can also taste the beer! 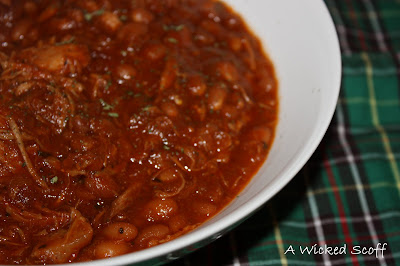 To give the beans a head start and to ensure they become tender in the slow cooker, boil them in water for 10 minutes while you prepare the remaining ingredients. Place all the ingredients in the slow  cooker, including the pork ribs and drained par-cooked beans. Stir well so that everything is combined. Cover and cook on low until the beans are tender, 8-10 hours. Remove the pork chops/ribs from the pot and remove the meat from the bones. Return the pork meat to the pot. Season with salt and pepper to taste. Serve with some good bread and a nice bottle of beer.