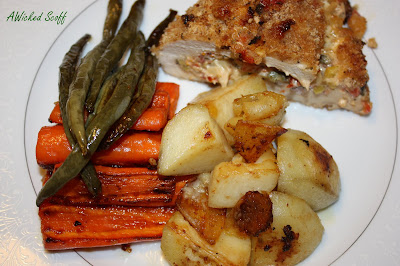 One of the first "fancy" things I ever cooked were stuffed chicken breast roll-ups. It was a tasty recipe I got from the Downhome Almanac & Cookbook which was a gift to Mom for Mother's Day one year. The recipe featured boneless, skinless chicken breasts, pounded flat, dipped in melted butter, dredged in Newfoundland style bread crumbs (breadcrumbs seasoned with salt, pepper and savory), rolled up and baked in the oven. As I remember these were tasty and always a hit. 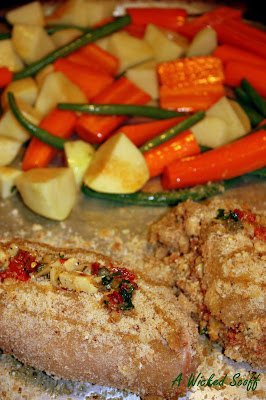 I don't make this recipe as much as I used to, but I am sometimes inspired by the technique to make other kinds of stuffed chicken breast roll-ups.The following recipe was created by picking ingredients out of my fridge one day after work. I had thawed some chicken breast, pounded them flat between two pieces of plastic wrap and set them in a bowl to quickly marinate in some olive oil, garlic, lemon juice and zest and fresh herbs. I then started picking through my stockpile of condiments in the fridge, namely marinated artichoke hearts, sun dried tomatoes, roasted red bell pepper, hot cherry peppers, and capers. I guessed on how much to use of each ingredient, chopped them up, and added some chopped parsley, oregano and garlic. I also had some leftover Gorgonzola cheese on hand so I put a small handful of the pungent cheese in the stuffing mixture as well. Each marinated chicken breast was then dredged in some store bought fine breadcrumbs, a big dollop of the stuffing went down on each breast (near the end, not in the middle), and then each breast was rolled up like a burrito, trying my best to tuck in the sides so the stuffing didn't spill out. The last step was to lace the stuffed breasts seam side down on an oiled baking sheet. Each breast received an extra drizzle of olive oil over the top and in they went to a hot 400 oven to cook for about 30 minutes.As you can see in the photos they came out crisp and golden brown! A side of roasted potatoes, carrots and green beans made for a memorable weeknight supper. 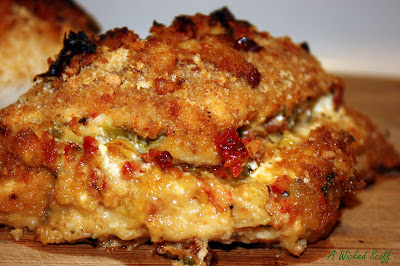 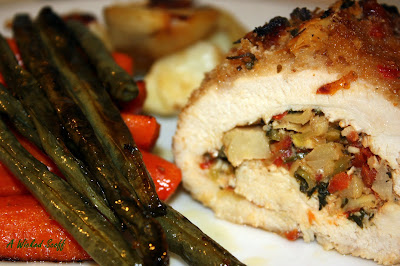 I'm not providing an ingredient list for this recipe for a couple of reasons. For one, I didn't measure how much of each ingredient I used....I just made it work. What didn't fit in each breast was spooned over the top and cooked in with the crust. Secondly, the possibilities are endless as to what ingredients you can put in your stuffing. In the past I've tried Tex-Mex style with pepper jack cheese, pickled jalapenos and tomatoes, and Greek style with spinach and feta. The possibilities are endless. The goal here is to get creative and use what you like and what you have on hand. Let me know what you come up with!