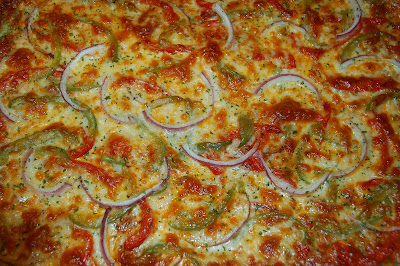 With the weekend almost here, I thought I'd write about a food I often save for the weekend, which also happens to be the food more than any other that hooked me on cooking at an early age....PIZZA! I love pizza, and really who doesn't...except my Dad for some weird reason because he usually eats anything, but he's not a pizza lover. Anyways, I love pizza of all flavors, and all styles, from deep dish to thin crust. Now that I live in New York State, I have access to some very fine pizza joints, and I've become a big fan of thin crusts. My favorite place though is "Joe's Cafe" in Northampton, MA, but I'll talk more Joe's another time.

As I said, I began making pizza at an early age. I don't remember when exactly but I'd guess that by 13 I had made a few Kraft " just add water" pizza mixes. Those were so great, with a yummy sauce and spice mixture included. It even came with parmesan cheese...well kinda. I don't know how many of those I cooked over the years, loaded with salami, pepperoni, bacon, hot dog wieners and cheese. I was a meat lover all the way. By grade 9 I had discovered homemade dough and from that point on I was making pizza, and later sauce too, from scratch. It's the only way to roll!

Here is my basic recipe for pizza dough. It is a yeast dough that generally makes two large pan pizzas, or 3 pies if I use my pizza stone. I have also added my basic pizza tomato sauce, which I use when making more traditional "red" pizzas...pepperoni, green pepper, mushroom, etc. I make a lot of "white" pizzas these days, without a tomato sauce, usually with some olive oil as a base. I'll be posting many of my classic and not so classic pizza recipes in the future. For now I'll give you a few pictures to tantalize your taste buds. 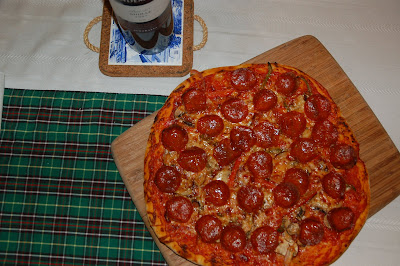 Basically just make a good dough and a good sauce, and add what you like. For me, the real key are the quality of the ingredients. Good pepperoni is a must. Until recently I used to have a problem finding the good stuff in St. John's (Newfoundland), but before I moved away, that was no longer a problem. Also, the vegetables must be fresh. For the cheese, I use mozzarella for many pies (skim is OK rater than whole...it actually melts better), and I like to grate fresh Parmesan or Romano around the crust before baking and also while eating. Other good condiments I like are chili pepper flakes and hot sauce. 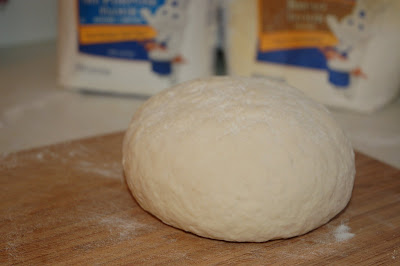 In a large bowl, add the warm water. Be careful to get the temperature right or the yeast will either not activate if it is too cold or be killed if it is too hot. I use my digital thermometer. Dissolve the sugar in the water and stir in the yeast. Let the mixture activate for about 10 minutes. Once the yeast has worked, add the salt and oil, and begin adding the flour gradually, mixing with a wooden spoon. I like to mix it into a well incorporated think batter, and then begin adding the flour more slowly. Near the end or the flour, its time to get your hands in there. On a clean counter, begin kneading the dough. This is a critical process, and it is important not to under knead. You may need to add flour to the board occasionally. I like to press the dough with the palms of my hands, fold it back on itself, and give it a quarter turn, and repeat. After kneading you will have built up the glutens in the bread...a key in good pizza dough. Form into a ball, and add a little olive oil to the bottom and sides of your bowl. Place the dough in the bowl, cover with a clean towel, and rest in a warm place to rise...about 1 hr, until well risen to the top of the bowl.

At this stage, I like to punch down the dough, cut it into however many pies I want to make (e.g. in half for two large pan pizzas). I next grease my pie pan with olive oil and begin stretching the dough. Once done, I cover again and let it rise a second time...for about 15-30 minutes. Then I restretch to the corners and its ready for toppings. If I am using my pizza stone, I let the second rise take place in seperate bowls, and hand toss the dough to make my pie. 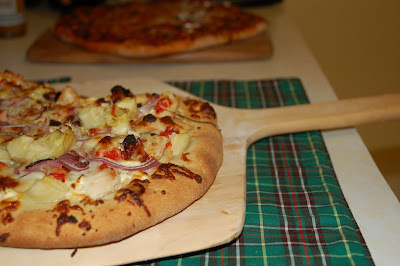 In a medium sauce pan, over medium heat, add:

the olive oile, onion and garlic, salt and pepper. Saute until softened, and add remaining ingredients. Simmer on a low heat for at least 30 minutes, preferably one hour. Adjust seasoning to taste (i.e. I like a somewhat sweet pizza sauce, others more savory or with some spice added for extra kick). That's it, and much better than any canned stuff.