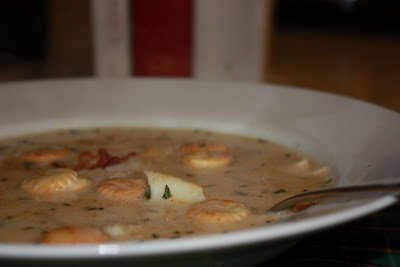 Chowder, or "chowda!" as you will hear it called in much of New England, is the ultimate east coast comfort food. While the classic New England chowder may be clam chowder, seafood chowders made with a single white fish such as cod or haddock, or paired with salmon, shrimp and/or scallops are also very popular. In Newfoundland clam chowder is not traditional. A great seafood chowder you may find in a restaurant in St. John's might feature cod, salmon and Newfoundland cold water shrimp.

This blog features a chowder I made the other night after work. It did not take a long time to pull together and the taste was just right. Some other chowders I make are more of a process as I often like to make a fish stock with fresh codfish heads. Since this was the middle of the week, I added a can of clams with their juice to bulk up the fish flavor. The chowder is cod based and I used about 2 lbs of fillets, with additions of onion, celery, potatoes and Newfoundland summer savory. For the dairy, I used a combination of heavy cream, butter and canned milk (evaporated 2%). To give the chowder some extra body and thickness, I added some slurry made with milk and flour. 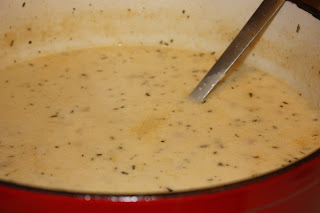 In a large heavy bottomed pot, saute over a medium heat

4 ounces of either salt pork or bacon, diced. Render out the fat and reserve the pork fat/bacon for later, some will go in the chowder and some will act as a garnish. I used a salted pork belly.

In the rendered fat, saute until tender, but not browned.

While onions and celery are cooking, peel 4 medium potatoes.

Take 2 of the spuds and half them, and slice as thin as possible. Add to the onions and celery. These potatoes will break down and add flavor and thickness to the chowder.

Cut the other 2 potatoes into small cubes, and add once the onions and celery are soft.

Add 6 cups of hot water, and bring up to a boil. Reduce to a simmer.

Cut the cod into 5 or 6 pieces and poach the fish in the pot for 4-5 minutes. Carefully remove the cod and reserve for later. Now add one small can of clams with juice, and tsp of dried summer savory.

Add 3 Tbsp butter, 1 cup of heavy cream and 1 cup of 2% evaporated milk. Bring the chowder to a simmer.

To thicken the mix, combine 4-5 Tbsp of all purpose flour with enough evaporated milk to make a slurry. Be sure to mix it well with a fork to remove any lumps. If you add the liquid slowly to the flour while you stir vigorously, lumps should not be a problem.

Cook over a simmer for about 10-15 minutes, until the chowder has thickened nicely and the potatoes have softened. Return half the pork scrunchins/bacon and the cod to the pot and mix gently to break up the fish pieces. Taste for seasoning. I add extra black pepper, sea salt, Old Bay seasoning and Lawry's seasoned salt.

Once fish as heated through, just a couple of minutes, serve in bowls with crackers and a few pieces of the fried pork scrunchins/bacon bits 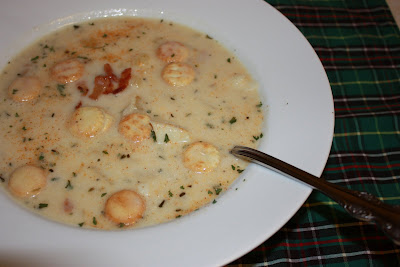