Here is part two of my birthday supper from last week.

Brussels Sprout with Calabrase and Lemon

For my veggie side dish I wanted to cook something I had not done before. I have only prepared Brussels sprout a couple of times and thus an original dish was easy to accomplish. I scanned a few online recipes for inspiration and after seeing that bacon and vinegar were usual accompaniments I used those same flavors. I did not have bacon in the house but I did have a spicy Italian calbrase salami, and I though lemon zest and juice would be a nice change instead of vinegar as a way to provide acid to the dish. Plus I figured the lemon flavor would pair nicely with the fish. In addition, the calabrase, with the chili flakes would add an element of heat and savory unlike just bacon. The dish turned out to be a real winner! Here is how I put it together:

In the meantime, heat 1 Tbsp of oil in a medium saute pan of medium-high heat, and add:
- 1/2 an onion, minced
- 2 ounces of Calabrase (or other dry salami), julienne

Cook until the onions are tender and add the par-cooked Brussels sprouts. Saute for a couple of minutes so the Brussels sprouts pick up some color. Then add the juice and zest of half a lemon.
Season with a little kosher salt and pepper. Serve immediately. 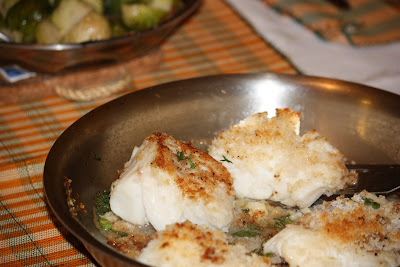 The fish entree was really quite simple. I bought a nice thick, 1lb piece of cod loin and cut it into 4 equally sized pieces.

In a large skillet, over medium-high heat, heat 2 Tbsp of Oil and 2 Tbsp butter.

Season the fish with salt and pepper, and press into panko crumbs.

Add the fish to the hot skillet and cook on one side for 3-4 minutes, until browned and then flip. Add the zest and juice of one lemon and another small pat of butter. Add the pan to a preheated 350 degree oven and cook for an additional 5 minutes. Remove from heat and sprinkle with chopped chives.