After last week's post about Diners and Ruben Sandwiches, it's only fitting that I continue with another diner staple this week...corned beef hash. To the best of my knowledge, you won't find too much homemade corned beef hash in Newfoundland, but you will find plenty of hash made from the leftovers of Jiggs Dinner. For myself growing up we usually had hash for supper on Monday nights. Mom would usually cut up the left over potato, carrot, turnip and cabbage, and throw in a bit of salt beef if there was any left, and give it a quick fry in the cast iron skillet in a bit of butter. When I started to get into cooking I took over the hash duties at our house, and I used to begin with frying onion, and then adding the potatoes. I would cook them until they got a bit crispy and then would add the remaining vegetables. I would also like to season my hash with salt and pepper, and sometimes some dry savory and paprika. The biggest difference in mine and Mom's was that I liked to have more of a crispy crust on mine. We'd usually have this with some Newfie steak...aka bologna. And not just any bologna mind you, it had to be Maple Leaf. Some of the other stuff really does taste like lips and ....well you know what. A bit of fried bologna (boiled if Mom and Dad were on a diet...that one I never understood), the hash and some ketchup and it was quite a feed.

Diner style corned beef hash is quite simple. Usually it consists of skin-on red potato pieces (usually pre cooked), a bit of onion and chopped corned beef, seasoned with paprika or seasoned salt, and cooked on the flat top. Some diners will make it with tiny diced potatoes, but I'm not a huge fan...it reminds me of the canned corned beef hash that many Newfoundlander's are likely familiar with. Some people love this stuff but I think it smells like cat food and has way too much salt.

As I said last week, I like to cook a corned beef brisket just for the sandwiches. That was a bit of a fib, as I also do it for the hash. Below are photos of two types of hash I made recently. The first is the more traditional diner style. For this recipe I used leftover new red potatoes, onions and chopped corned beef. It couldn't be simpler to make. Here is a recipe for 4 hearty servings for a brunch side dish

In a large skillet, over medium heat, add:
- 2 Tbsp oil
- 1 yellow onion, diced
Cook until the onion softens a bit, and add:
-  about 8-10 small cooked and cooled red potatoes, cut into 1 inch chunks
Season with a little salt and pepper and fry until crispy, about 5-7 minutes.
Reduce heat to medium low and add a good handful of chopped coked and cooled corned beef.
Cook for a couple more minutes in order to heat the corned beef through.
Serve onto warmed platter. Great with eggs cooked any style, and some hot sauce! 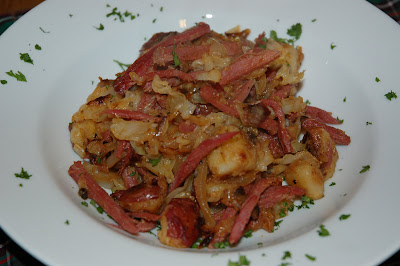 The second hash I made has the same ingredients, but was prepared differently. For this one I used my mandolin to make shoestring potatoes (raw) and cooked the potatoes first until they were tender and crispy, and then added minced onion (so it would cook faster) and then the corned beef. I finished it off with some green onion and seasoned salt. I have to say, I liked the second version a little better, but both are outstanding! 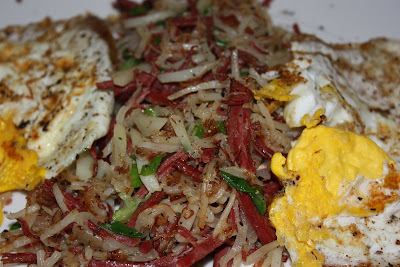