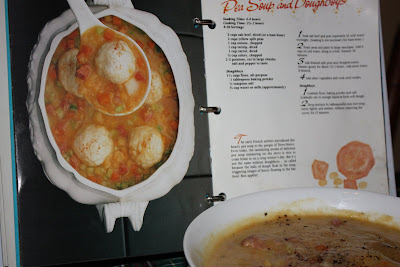 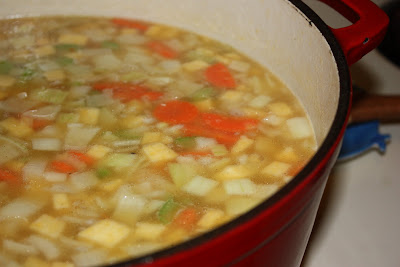 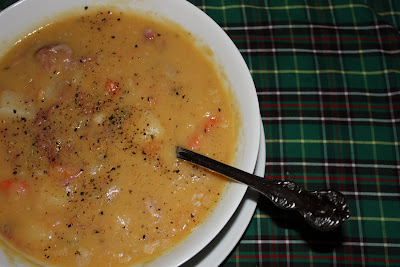 I doubt if there is a single grandmother in Newfoundland, or "nan" as we like to call them, that doesn't make the best pot of pea soup. This traditional French-Canadian habitant pea soup, made with yellow split peas, a left over ham bone and some vegetables has been a staple for families both in Newfoundland and New England. The recipes I've seen from both regions are nearly identical, with yellow split peas, a meaty leftover ham bone or salt meat or salt pork if you don't have one, and then roots veggies such as onion, carrot, celery, turnip and potatoes. In Newfoundland it's traditional to serve "doughboys" with pea soup, a simple dumpling made with flour, baking powder, salt and water or milk, which are steamed atop the soup just before serving.

Last week I had a craving for peas soup, something I refused to eat as a kid because of the smell. For the most part I followed the recipe in Book 9 of Traditional Recipes of Atlantic Canada, however I made a few changes.

Unfortunately I did not have a meaty ham bone What I did have at my grocery store however were smoked ham hocks, which are almost just as good. I also avoided soaking the peas and I added more water. I have never found that soaking the peas overnight saves any noticeable difference in cooking time. Plus I found that using 8 cups of water means I has to add more. Lastly, instead of the 2 cups of peas in the book recipe, I added 1 pound, which happens to be one bag. I didn't measure it but it's not far off 2 cups. Lastly, I love savory, and I added some of it near the end. I also saw savory in a traditional New England version of this soup. We're not so different you know. Here's how I put it all together.

Meanwhile pick through (for stones) and risne:
- 1 pound of yellow split peas

After the ham hocks/bone have cooked for one hour, add the peas, stir and simmer for another 1 1/2 hours.

Add the vegetables and 1 tsp of dried savory (rubbed between your fingers), and cook until the vegetables are tender and the soup has thickened. Taste and season with salt and black pepper.

For an extra treat make some doughboys and serve hot on a cold winter night!