Pulled Pork Sandwiches...Satisfaction at its finest! 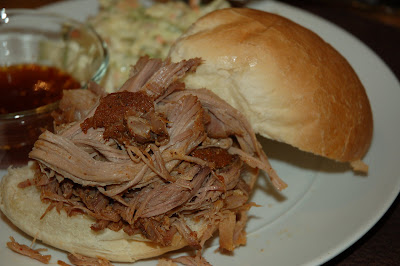 I really enjoy pork...the other white meat as they say. As Homer Simpson would say..."yes Lisa, a magical animal". Growing up in rural Newfoundland pork was an easy and inexpensive option for meals. In Newfoundland pork chops more often than not are the choice for barbecuing (grilling), ham is a staple, and pork roasts are a common meal. For me personally, I was fortunate to enjoy a "cooked dinner" every Sunday, which consisted of Jigs Dinner (salt meat, carrots, rutabaga, cabbage and potato, and usually a peas pudding) plus more meat, either a stuffed chicken, a pot roast, or a pork roast...each with a delicious gravy to smother the works in. While I'll talk more about all those other foods in future blogs, right now I want to focus on the pork roast.

The most common choice for a pork roast, is a bone-in butt roast (actually from the front end of the pig, not the ...well you know). This cut is a bit fatty, but with that you get awesome flavour. You also get a cut of meat that can be slow cooked (very hard to overcook) so it becomes fall off the bone tender and very juicy. With Jigs Dinner, the only way I ever had a pork roast was cooked for 3 hours at 350 with salt, pepper and onion. As it turns out, the pork roast is common in many cuisines, and one of the most popular is in southern US BBQ, and more specifically "pulled pork". While the most authentic pulled pork is cooked long and slow in a smoker, my recipe for the home cook is cooked long and slow in either a slow cooker or low oven. I add a homemade dry rub and serve it with a kicker of a sauce.

This BBQ sauce may be like no other BBQ sauce you've ever had. It's "watery" instead of "ketchupy" and is best applied just before each bite you take of the pork or the sandwich. This is my adaptation on a recipe a friend of mine gave me. His girlfriend is from South Carolina so it;s pretty authentic.

Fill a mason jar with

Preheat oven to 300 or use a slow cooker
Use a 5-6 pound butt (bone in) pork roast, as you will want leftovers. This will feed a crowd.
Rub the entire roast with enough of the dry rub to completely cover.
Add seasoned roast, to a roasting pan, add a splash of water, apple juice or beer, and cover.
Cook for six hours, or at least until bone can be pulled free with no resistance.

Remove from oven and let rest, covered for 15 minutes.
Using two forks, shred the meat (I also encourage you to taste juicy morsels)

Select good roll for your sandwiches, and toast/broil them to add a little crunch.

Pile the rolls high with pork, add a little sauce, top with the roll. Keep some of the sweet/sour and hot BBQ sauce handy and spoon or squirt some before each bite. You will not be disappointed. I like to serve this with a good coleslaw and a glass of iced tea.