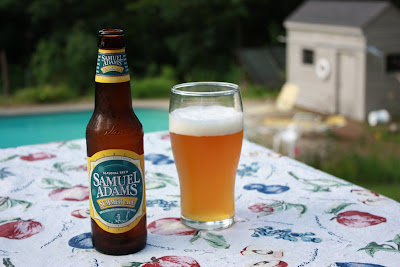 Last weekend I officially kicked off summer with three days of fun, food and relaxation around the July 4th holiday. There were good eats, many games of tennis, croquet and bocce ball, and a nice selection of cold beers to wash it all down during a glorious streak of sunny weather.

As expected for such a long weekend, much of our time was spent outside, either pool side, on the lawn or for me, next to the grill. One night I made a traditional New England 4th of July meal, salmon (grilled with olive oil, Old Bay and fresh lemon juice and chives) with new peas from the garden and new potatoes, for the 4th itself there were classic burgers and hot 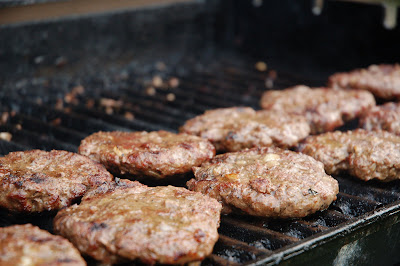 dogs, and finally on the last day of the weekend I grilled up some pepper crusted steak and veggie kabobs, featuring de-boned and cubed T-Bone steaks, sweet vidalia onion, green and red pepper. With all that eating its a good thing I'm part of an active family who are game for 4 hours of bike riding and playing tennis each day on the weekend. Top that off with walking 9 holes on the golf course on a Saturday afternoon and a man works up quite an appetite. Especially when the golf bag is weighed down with a 6 pack of beer! Speaking of which, this blog entry will introduce to the next "Beer of the Month", which will actually stretch into the "Wicked Scoff Beer of the Summer". It's that good and that refreshing that it will take us right up until Labor Day!

Beer of the Summer 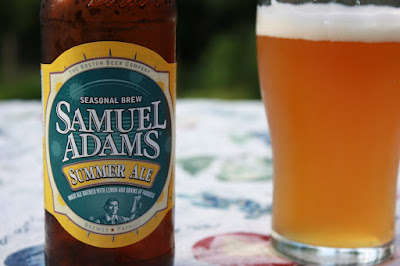 I really enjoy many of the vast array of beers offered by The Boston Beer Company, simply known as Samuel Adams out of Boston, Massachusetts (http://www.samueladams.com/Default.aspx). Once upon a time, but no longer a micro-brew (they like to call themselves a craft brewery), the award winning (most awards of any beer in the world) Samuel Adams pride themselves on big, bold complex flavors and not shying away from their use of hops. Their signature Boston Lager and Sam Adams Lite are excellent beers. The Lite may be the most flavourful, well balanced "light" beer money can buy. Samuel Adams also offer numerous other styles of beers, 17 to be exact, many of which are only available seasonally. For instance there is an Autumn brew, and Winter ale, and this, a Summer Ale. That's the one I'll focus on here, Samuel Adams Summer Ale (aka Sam Summer).

Sam Summer is a wheat ale, brewed with lemon zest and a rare and ancient pepper called paradise. With hints of tropical fruits like peach and mango, Sam Summer is that perfect summer beer, that actually tastes like beer. It is well balanced, fruiting and most importantly tasty and thirst quenching. I know I'll be drinking my share of these this summer...I hope you can have one too!