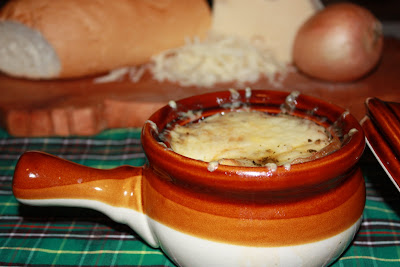 One of the tastiest, most comforting soups I can think of is French Onion Soup. With bubbling Swiss cheese covering a rich, beefy broth full of caramelized onions, it really hits the spot. All too often however I get a really bad version of this classic soup at restaurants. Sometimes the broth is like brine, and way too salty. Other times there is no broth to speak of, just big soggy croutons underlying a bland mild cheese that is definitely not Swiss or Gruyere...or even an aged cheddar.

I know when I'm eating a really good French Onion Soup. The broth does not have to be homemade from scratch (although that would be an excellent bonus), but it can not be from a bouillon cube. The onions do have to be cooked low and slow to get the proper canalization, and there should be a je ne sais quois, a little extra depth of flavor in the broth. In classic versions of the recipe, this extra body usually comes from the addition of dry sherry or cognac, but I've also seen red wine added instead. To make this dish my own as I often like to do, I used beer...and not just any beer. I chose the straggler from my Saranac Beer Fall variety pack, the Bavarian Black Forest beer. The carmel malts and the dark creamy texture of the beer were the perfect compliment to the sweetness of the onions and the richness of the beef broth. The overall flavor of the soup was spectacular. I served the soup to my wife and she did not know there was beer in there, but knew there was a secret something extra providing complexity to the soup.

Here is my recipe....enough to fill 4 French Onion Soup crocks.

In a large, heavy bottomed pot or Dutch Oven, heat:
3 Tbsp butter and 3Tbsp olive oil over a medium-low heat

Add:
2 cloves of garlic minced
A pinch of dried thyme and summer savory

Continue to slow cook the onions and garlic over a low-medium heat until the onions develop a brown color, about another 20 minutes.

Deglaze the pot by adding 1 cup of dark beer.

Increase the heat to high to cook off the alcohol and bring the mixture to a boil.

Add 4 cups of beef broth (carton/canned is fine...low sodium) and simmer on low heat for 20 minutes.

While the soup is simmering away, grate a pile of good Swiss of Gruyere cheese (classic) and cut 4 slices of fresh French bread. Toast the bread before assembling the soup.

Once the soup is cooked, taste for seasoning. Add some black pepper and salt as needed. Distribute the soup amongst 4 crocks, top each crock with a piece of the toasted bread, and top off with a small handful of the grated cheese. Place in a hot oven or under the broiler until the cheese is browning and bubbling.

Serve right away and enjoy.