Beer of the Month - India Beer

I enjoy drinking and sampling different kinds of beer...and wherever I travel, I like to sample local microbrews and regional beers. I also enjoy cooking with different styles of beer, as the ingredients in beer can add great complexity, depth of flavour and richness to numerous dishes. 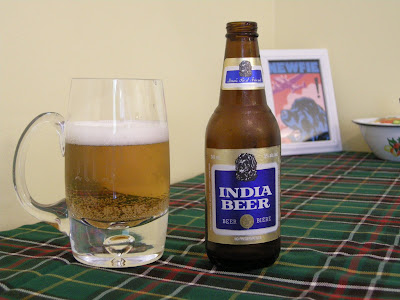 For June's beer of the month I have selected my favorite "macro-brew" from the great province of Newfoundland. The beer is India Beer, and as you can see in the picture, has a wonderful image of the famed Newfoundland Dog on the label. While only available in Newfoundland, India Beer is not a microbrew, as it is produced by Molson as one of their many "regional" beers. With that being said, India has a taste and character that separates it from other macrobrews such as Mosson Canadian, Labatt Blue, Budweiser, etc. Also, it should be noted that India, is not an india pale ale (IPA) style of beer, it is a lager, or more specifically a golden lager. IPAs are much hoppier and strongly flavoured than your lagers. India on the other hand, is much lighter on the pallette. It has a rich golden colour, darker than many mainstream of the same variety, and there are undertones of hops and corn, with a slight pungent aroma. India is also well suited for the Newfoundland beer drinker. It is not so lite that it is bland and watery, yet it is not so heavy as to limit you to drinking 5 or 6. On a hot June afternoon after a day of trouting or playing softball, there's nothing better than enjoying a twelve pack of icy cold India Beer!

Email ThisBlogThis!Share to TwitterShare to FacebookShare to Pinterest
Labels: beer