I think everyone should have a rhubarb patch tucked in their garden. If you have had the luxury of having your own fresh supply of rhubarb year after year, you know what I'm talking about. Growing up we always had rhubarb, and with that, we always had rhubarb jam, or more specifically Heavenly Jam. Heavenly Jam is something I associate very strongly with my grandmother (Father's side), or nan as we say in Newfoundland, and luckily for me, her jam was something my mother was able to master, and now I enjoy making each spring.

While I only planted my first New England rhubarb patch this year (will have to wait two seasons until I can get a good harvest), I do have the luxury of buying rhubarb at local farmers markets and grocery stores. If you don't have your own rhubarb, hopefully you can find a market that sells it, or better yet, have a neighbour that is willing to share. If they do, promise them you'll give them a bottle of Heavenly Jam. 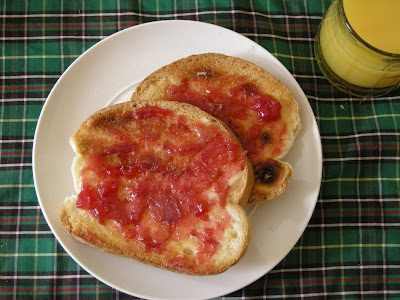 Growing up, I thought Heavenly Jam was my Nan's special and secret creation. I didn't know anyone else who made jam like that. It was our family's signature recipe. With that being said however, I have since seen Nan's exact recipe published in local church cookbooks and the like between New England and Newfoundland. Not such a secret recipe after all, but a darn good one just the same.

Heavenly Jam, is a close relative to traditional strawberry rhubarb jam, and they taste quite similar There are some differences however. First, in place of real strawberries and fruit pectin, we add strawberry jelly powder....killing two birds with one stone if you will. Secondly, there is crushed pineapple in heavenly Jam...the "je ne sais quois" if you will!

This jam recipe is a cooked jam, that is meant to be stored in hot sterile jars. I submerge my jars, lids and rings in a large pot of boiling water and retrieve them with tongs as I fill my jars. I also have a large canning funnel which keeps the sides of the jars clean while filling. 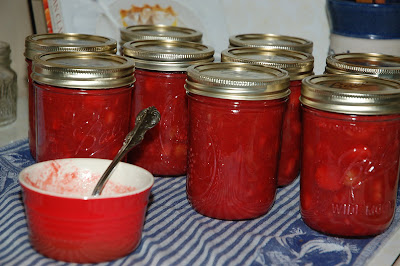 Cook on a medium-low heat and bring up to a slow simmer.
Simmer for 10-15 minutes, until rhubarb has broken down a bit and given off its juice.

Add and stir well:
1 large pack (2 small packs) of strawberry flavoured jelly (I use Jello)
Mix well, reduce heat to low and after a minute or two, your jam is ready to bottle.

Fill sterile jars to near the top, add the lid and the ring, and turn just until tight (do not fully tighten) Wipe off any excess. As the jars/jam cools, the jar will seal and the lid will pop down. After this, you can fully tighten the lids and store jam in a cool dark place, like you cellar.

This recipe makes about 5-6 pint sized jars of jam.

I enjoy this jam on many things, the best of which is on toasted homemade white bread, buttered cream crackers, toasted bacon and jam sandwiches (I kid you not!), in a pie or tart, or on vanilla ice cream. The list could go on. I hope you enjoy. 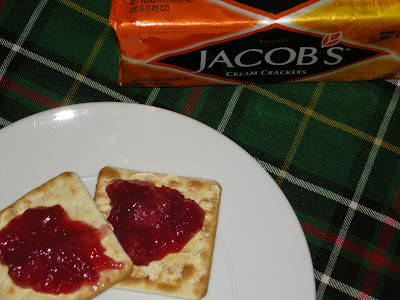