We've probably all grown up eating meat and rice stuffed green  peppers, often accompanied with a tomato based sauce. I'm a big fan of different types of stuffed peppers (eg. Southwest Stuffed Poblanos) and I like coming up with new recipes out of the blue. The end result is the following recipe. I had an excess of red peppers at home, and with some chorico sausage and Mexican cheese in the fridge, I created Spanish style stuffed, roasted red peppers.  Here's is how I make them. 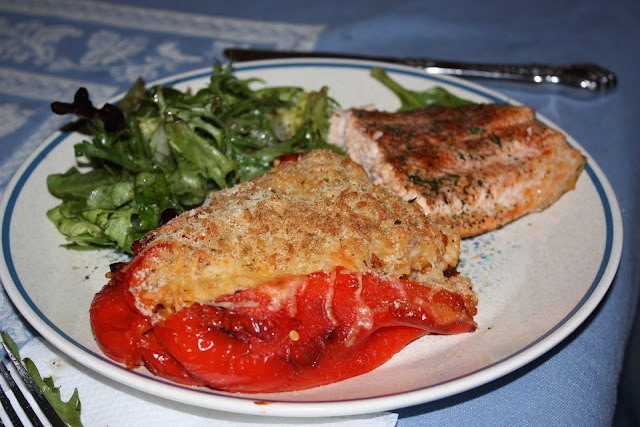 Spanish Style Stuffed Roasted Red Peppers
Cook 6 servings of white, long grain rice according to package directions. For extra flavor, use half water and half chicken stock for the cooking liquid. While the rice cooks, prepare the peppers and the remaining stuffing ingredients.

Preheat oven to broil (or grill over a flame). Wash 6 large red bell peppers. Place on a baking tray, and drizzle with a little olive oil. Rub the peppers with your hands and broil until all sides have been charred. Move to a bowl and cover with plastic wrap. Let roasted peppers sweat for 5-10 minutes and remove the skins. Make one slit down the length of each pepper and remove the seeds. Arrange the slit peppers on a baking tray and reserve for stuffing. This can all be done while the rice is cooking, and you're making the other elements of the stuffing.

In a large saute pan, heat 1 Tbsp of olive oil and add:
8oz Spanish/Portuguese style chorico sausage, diced
Cook over medium heat for 3-4 minutes, until it renders a little fat and begins to brown, Remove from pan and reserve.

Using your hands, combine the mixture well, and spoon into the cavities of the peppers.
Top each pepper with a healthy portion of grated cheese. I used a Mexican cheese blend (pepper jack, queso, asiago, cheddar), but whatever you have, as long as it has some good bite. Then top with a little bread crumbs.

Since everything is cooked, these will not take long.

I baked mine at 350 for about 15 minutes, and browned the cheese at the end under the broiler.

These stuffed peppers make a great side dish to any meal, or are even good on their own, or as a first course.

I served mine with some lightly dressed salad greens and a lemon broiled salmon fillet. 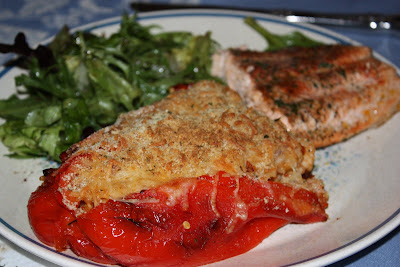