If you're like me, you are still in the Irish spirit of St. Patrick's Day. Where I come from St. Patrick's Day celebrations last up until your last drink of the day this coming Sunday. I did a wee bit of celebrating on Thursday with a couple  pints of Black Cat Stout and a fine Corned Beef sandwich at the Northampton Brewery in Northampton, Massachusetts (there was also great live Irish music). It was a good time but my real St. Paddy's Day party will be tonight at The Irish Times in Saratoga, New York. Friends and family are coming later today and we'll be heading out for some Irish fare, a few pints and hopefully a jig or two while listening to the band. I think I might try their Potato and Leek Soup, a classic Irish dish, and see how it compares to the batch I made last weekend. 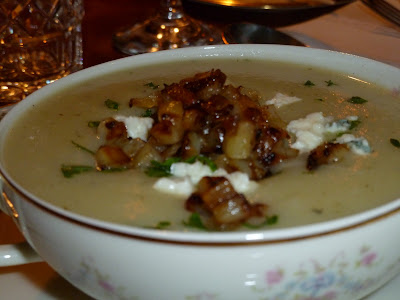 Some Potato & Leek Soup recipes are cream based, meaning they contain a fair amount of dairy (either milk or cream) however I make my potato-leek soup mostly with chicken stock, using only a small amount of milk at the end to round out the soup and give it nice body. I find the potatoes do a great job on their own of making the soup "creamy" and you can really taste the leeks and potatoes without too much cream. To give my soup an extra flavor burst I topped it with some sauteed diced potatoes and onion, in addition to a little cheese. Since we were having a fancy dinner last weekend I used Gorgonzola cheese to finish off the soup and it was amazing. The cheese offered a little saltiness and tartness, in addition to a great texture contrast, as did the crispy diced potato and onion. This is a very simple recipe and I hope you give it a try. 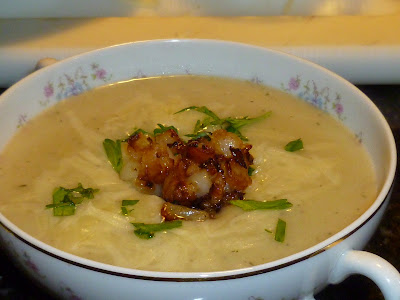 Since their is a fair amount of knife work involved, you'll want to have your leeks and onion prepped before heating up your oil and butter. To get your leeks ready you'll have to clean the inside of them very well as they often have sand in them. To start, trim off the root end and then cut off the dark green tops. I usually make my cut just where the color turns to dark green. Next run your knife down the length of the leek, cutting it in half length-way. To clean them you can simply run the cut side of the leek under running water, opening up the layers of leek to wash away any grit or sand. With a sharp knife slice the halved leeks in into thin slices. Now, in your favorite soup pot add the butter and oil and heat it over a medium heat. Add the leeks and stir to coat with the oil and butter. Stir every couple of minutes as they cook and you prep the remaining ingredients. While the leeks saute, prep your onion (rough chop) and add it to the leeks. Next smash and chop the garlic and add it. Season the mixture with a little salt and pepper (not too much as its best to continually season as you cook).Peel the potatoes and half them. With the cut side down on the board slice the potatoes as thin as you can (think half moon shaped potato chips). Don't rinse the potatoes as the starch will help thicken the soup. Add the potatoes to pot, along with the dried savory, and stir the mixture well. Next add the chicken stock. This should be enough to just cover the leek and potato mixture. Bring the pot to a simmer and let cook until the potatoes are tender and have broken down. This usually takes about 30-45 minutes, thus giving you a nice break in the action. At this stage you can set the soup aside for hours or overnight in the fridge and finish it later.
After the soup has broken down and become tender it's time to blend. While this can be done in batches in a blender I recommend using an immersion blender as it is a lot easier. Blend the soup until it is smooth and add the whole milk. Taste for salt and pepper and add the freshly chopped thyme. Season with salt and pepper to taste. Simmer the soup for about 10-20 minutes on a very low heat until ready to serve.

For the garnish, heat the oil in a non-stick saute pan and add the finely diced potatoes. Cook on medium heat until they start to become tender and then add the minced onion and butter. Season with salt and pepper and cook until crisp and golden brown.


Pour the soup into bowl and garnish with some cheese (cheddar or Gorgonzola) and then add a spoonful of the fried potatoes and onion. Serve with some crusty bread and enjoy!