Here at A Wicked Scoff I'm always thinking about how I can take traditional Newfoundland or New England ingredients and use them in a new and unique way. Living here in the Boston States I do not have a full arsenal of Newfoundland fare at my disposal but I do have special products that let me get my creative culinary juices flowing. 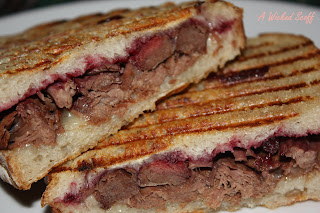 Down to my last couple pint sized Mason jars of my Uncle's bottled moose (from central Newfoundland), I decided to try something special. I wanted to build off my last bottled moose creation, the moosewich dip, and go more outside the box. I know that red meat, and especially game go great with tart berries, wine and port so I utilized a couple other Newfoundland ingredients and came up with a tasty moose panini sandwich.I paired the tender morsels of moose with some tart partridgeberry jam (aka lingonberries in other parts of the world, notably in Scandinavia or at IKEA stores) and sharp aged cheddar cheese. I made these grilled sandwiches on some wonderful, locally made rustic sourdough bread, for even extra tang and a great chew. Any kind of good quality bread would be great though. Not wanting to throw away and waste all the moose bottling liquid (referred to as moose liquor from this point forward), I paired it with some Newman's Port. I drizzled the port moose liquor reduction around the plated panini and dipped some of the bites into it for an extra fruity, salty burst of flavor. Here are some pictures and how I put it all together. 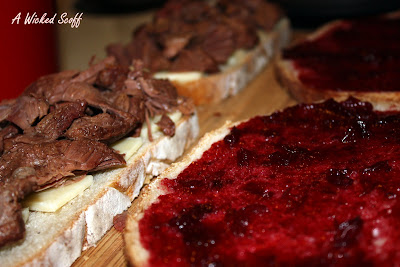 Directions:
First off, I you do not have a panini press, don't sweat it. These sandwiches can be made in a skillet just as you would a grilled cheese or even on a cast iron griddle. If you want the panini effect of the sandwich getting pressed add a heavy pan to the top of the sandwich to press it a bit. 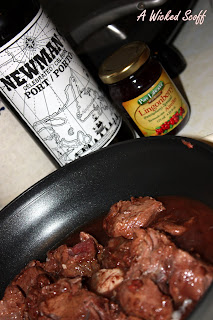 To start, place the contents of your bottled moose in a small skillet (I use a skillet as opposed to a sauce pan as this will help with the reduction later). Heat the moose and liquor through over a medium heat. I like to have the moose warm on the sandwich instead of putting it on there cold. Next, plug in your panini press and let it get hot. Lay out your four slices of bread and begin to assemble the sandwiches. Spread 1 Tbsp of the jam on two slices and cover the other two slices with thinly sliced sharp cheddar cheese.Next divide the tender moose meat atop the slices with the cheese. There should be enough moose to sneak a couple pieces into your mouth as a little snack. Lay the jammed slice of bread onto the moose/cheese slice and you're all set. Open your panini press and spray both sides with nonstick spray or oil. Lay on the sandwiches and press down. Cook according to your machines directions or until browned, crispy and heated through.

I let the paninis rest for a couple of minutes (they're too hot too eat) while I make the reduction. Bring the reserved moose liquor to a boil and add a 1/4 cup of port. Stir together and let reduce until it becomes syrupy and coats a spoon. Use this reduction to drizzle around your plated panini for dipping. This sandwich was a huge hit at home the other night and I'm sure it will be for you and your friends and family too. Paired with a nice glass of Rodrigues wine or cold glass of beer and you'll have a great combination. So here you have it, two of Newfoundland's best ingredients, moose and partridgeberries together again, just as they are in nature out on the barrens. 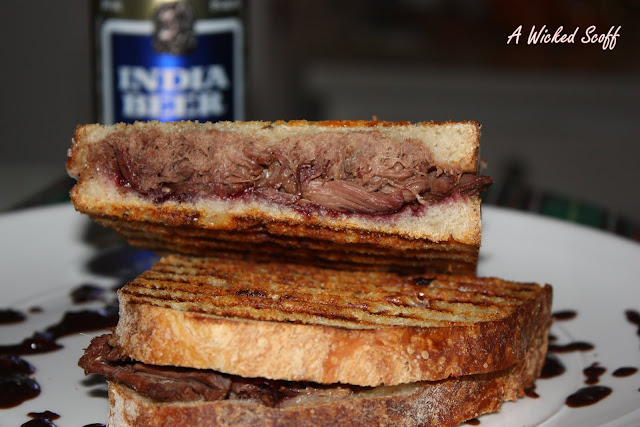