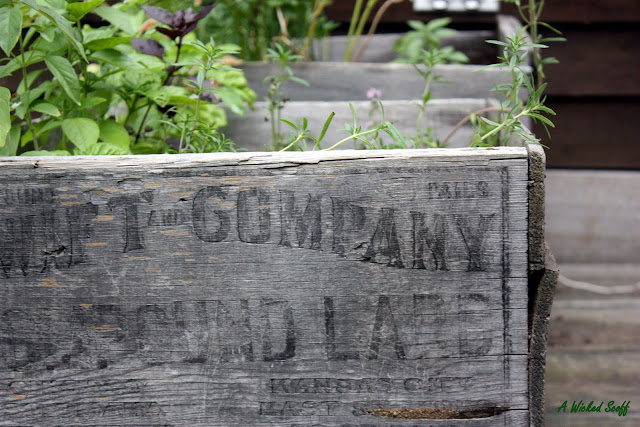 Of all the ingredients associated with Newfoundland cuisine, I do not know if there is one more synonymous than dried savory. While items such fat back, molasses, salt cod, and Purity syrup are very much a part of our culinary history, summer savory, especially that made by Mt. Scio Farms in St. John's is as Newfoundland as it gets. Just as you are are certain to find an empty Maple Leaf vienna sausage can at the outlet of every brook at every pond in Newfoundland, you're even more likely to find a package of dried savory in every kitchen cupboard in the province. 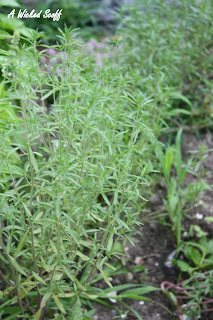 Newfoundlander's love their savory. We really love it in out "dressing" ( aka stuffing) used for stuffing turkeys and chickens for roasting. Unlike some complicated turkey stuffing recipes, Newfoundland savory dressing is quite simple to make really, combining fresh bread crumbs (homemade white bread is best) with minced onion, some melted butter (usually margarine actually) dried savory and possibly a little salt and pepper. Almost as popular as savory in fact is savory dressing you;ll find elsewhere besides in a roasted bird however. A signature Newfoundland dish is the ever-popular fries (or chips), dressing and gravy, which can be found at most any restaurant and take-out, stadium or chip truck. The dish, when prepared right consists of a pile of golden homemade french fries (double-fried), combined with fluffy savory dressing and smothered with a rich home-style chicken gravy (darkened with gravy browning of course. None of this white chicken gravy stuff...that would be gross). French Canadians have their poutine, other places have chili cheese fries, but our carb-laden, heart-attack on a plate is the most satisfying and tastiest in my opinion.

Besides being used in dressing, savory is also commonly used with fish and other meats. It goes great in cod au gratin and with fried or braised pork chops. For me though, the uses and application of savory are unlimited. While I enjoy my supply of dried Newfoundland savory very much, I decided this spring to try growing my own savory. Dried herbs are good and have their place in cooking, but there's really no substitute for the flavor achieved from using fresh herbs. Not being able to find savory seeds at some local stores here in western New England, I opted for the Internet and was quickly able to find organic summer savory seeds online. What is "summer" savory you ask? Well there are two varieties of savory, summer and winter. Winter savory is a perennial herb (meaning it grows back every year in our climate....and year round in warmer
regions) while summer savory is an "annual", meaning it has to be replanted by seed every year. Winter savory is a little woodier plant that summer savory and the leaves have a stronger, more robust flavor than its cousin. Summer savory, which is the kind I grew up eating in Newfoundland, has a pungent, sweet and peppery flavor, similar but still  distinct from thyme and sage. Traditionally, summer savory is a popular herb used with wild game and waterfowl, sausages, stews, beans, and potatoes. It's quite common in some regions in eastern Europe, but why it became so popular in Newfoundland is something I still do not know. Whatever the reason, I'm glad it ended up on our shores!

So, with all the beautiful summer savory I have growing in my garden, I wanted to make a simple bistro style dish using a few simple, but very tasty ingredients. Many people know that once of the best and satisfying concoctions is the pairing of hand cut french fries tossed with fresh rosemary and salt. Some places take this even farther and grate some pungent Parmesan cheese with the mixture for a truly delectable experience. Not to be outdone, I decided to take this to the next level and make my own version. What I did was cook some of wicked simple oven roasted fries. While they were still piping hot I tossed them with sea salt, a tablespoon of fresh minced savory, and a little grated Grana Padano cheese (a hard, aged Italian cheese). After plating the salty, herby fries, I drizzled just a little of my truffle infused olive oil around the plate. The result was literally heaven on a plate as the aroma of the earthy truffles with the herbs as they reacted with the heat of the crispy fries, paired with the sea salt and cheese, was a flavor explosion in my mouth. The freshness of the savory really let the defining characteristics of the herb shine through, an affect that could not be duplicated with dried herbs. The dish did in fact remind me of fries, dressing and gravy, without the bread stuffing or the gravy, and hence without a lot of extra calories and fat. I encourage you to try growing your own savory and when you do, try this upscale spin on a Newfoundland classic. 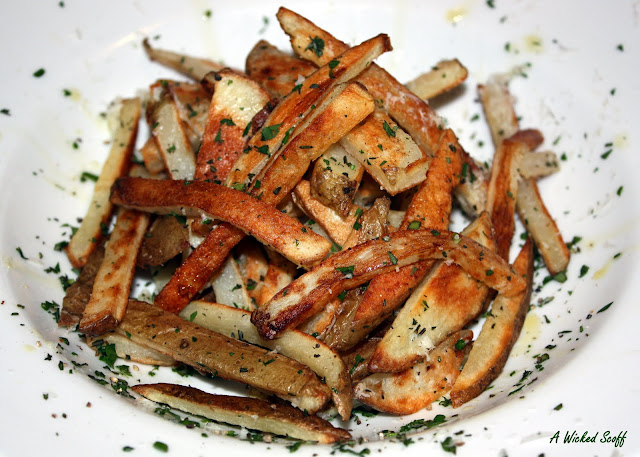